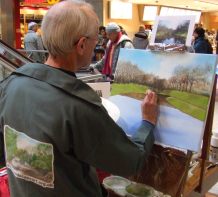 I have been passionate about painting and the beauty of the world around us for decades.

When I became an electrical engineer after studying at Aachen University and the Imperial College London I continued to paint and perfect my techniques in my spare time.

Art Societies
After turning to art full-time I was accepted as a member to the Devon Art Society of Torquay in 2012. Since then I have studied traditional painting techniques building upon the experience of many contemporary artists.

I am also the president of the NAROMA Art Society  attending many solo and group exhibitions both in England and Germany. Furthermore I am the co-founder of AERA the Association Embracing Realist Art.
In 2013 I was presented with the Judges Award at an exhibition in England and in 2015 my name was entered into the German dictionary of artists. The Centenary Award for Miniatures followed in 2018 as well as a nomination for the Palm Art Award in 2018 and again in 2019.

My paintings created in the traditional style can be found in private collections in several countries. One of my creations can even be seen as a permanent feature in a museum in Greater London.

I love painting en plein air but often use my own photographs and my experience together with personal memories to create my impressions of a landscape. Since 2016 I receive annual invitations to paint and exhibit at the Koekkoek Museum in Cleves creating interpretations of the works of the 19th century Dutch master.

Influences
I have studied the techniques of Herdin Radtke who used to work with Salvador Dali in his early years. I admire the work of artists like Alwyn Crawshaw, Alan Kingwell, Gregg Kreutz, Brian Gorst, Vergil Elliot and many others.

I also love the old masters such as John Constable, Thomas Gainsborough, B.C.Koekkoek, and Claude Monet as well as Salvador Dali to name but a few.

My favourite subjects are the coast and country of Devon and Cornwall as well as the mountains of Austria but I have also captured famous buildings around Europe. More recently I have worked on paintings of still lifes and beautiful sceneries near my home town.

I work from my studio in Germany and pay regular visits to England and Austria for inspiration and to explore my favourite motifs not to mention the occasional commission.

2 thoughts on “About the Artist”

This site uses Akismet to reduce spam. Learn how your comment data is processed.

We may refer to links to other websites. We expressly declare that we do not have any influence on the presentation and contents of these sites. We must therefore distance ourselves form their contents. This declaration applies to all the links, the contents of their pages, and other pages linked to them.

Any legal information relating to the underlying master website can be found clicking here.

© Pat Harrison Pictures and information on this Website are subject to Copyright and may only be used with my express written consent.