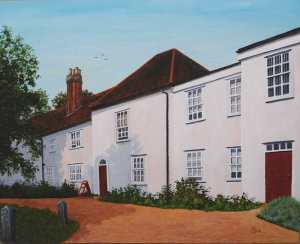 Exhibition to celebrate 70 years of post war friendship between the London Borough of Barking & Dagenham and the town of Witten in Germany.

In May 2017 an exhibition at Valence House was set to commemorate the achievement of the people of Dagenham. They put into practice what Field Marshal Montgomery had suggested in 1945 when he said ” We have won the German war. Let us now win the peace”.

The exhibition showed paintings with picturesque landmarks of the twin towns of Barking & Dagenham and Witten. It also told of the history of the exchange which started with a Christmas dinner of German POWs in private homes in Dagenham back in 1946. It continued with an annual youth exchange and the official twinning of Dagenham and Witten in 1979. The connection between the towns is now being maintained by the Barking & Dagenham-Witten Club.

The artist staging the exhibition was born in Germany just after the war and grew up hearing about how much misery Hitler and his followers had caused. Living amongst the rubble the bombings had left behind he had learnt that Germans were responsible for devastation and hardship all over Europe. The more surprised he was to be received in an atmosphere of friendship when he first came to England on a youth exchange back in 1963.

Ten years later he married a girl from Dagenham at the Holy Family Church in Oxlow lane. Arthur Durrant, one of the founders of the exchange was guest of honour. The artist proudly uses his wife´s maiden name as his pseudonym. Pat Harrison is a member of Devon Art Society and co-founder of AERA a group of artists around the British painter Charles Harris who is a strong advocate of realist art.

Pat is planning to take the exhibition over to Germany in 2018. It will then be shown together with works from O.Yemi Tubi an artist from Dagenham who has created moving paintings about the disturbing truths the world is facing today. Yemi´s subjects range from the refugee crisis to famine and the ills of war.

Leeanne Westwood of Valence House readily accepted Pat´s suggestion for an exhibition to commemorate 70 years of friendship between the towns, which Pat appreciates very much.

The grand opening with invited guests took place on Sat 13 May. We were very pleased to have the Mayor of Barking & Dagenham, Councillor Eileen S Keller honouring us with her visit. This link will take you to a video about the event.

The exhibition ended Sat 29 July 2017.
Valence House in Becontree Avenue, Dagenham is open Tuesday to Saturday, 10 am to 4 pm (except public holidays). Admission is free except for certain ticketed events. Original paintings and limited edition prints as well as other memorabilia are still available for purchase.

Here are some of the pictures which will be on show with brief explanations about their history.

Germans with Dagenham hosts after WWII

We may refer to links to other websites. We expressly declare that we do not have any influence on the presentation and contents of these sites. We must therefore distance ourselves form their contents. This declaration applies to all the links, the contents of their pages, and other pages linked to them.

Any legal information relating to the underlying master website can be found clicking here.

© Pat Harrison Pictures and information on this Website are subject to Copyright and may only be used with my express written consent.